“If they can get you asking the wrong questions, they don't have to worry about answers.” Pynchon, Gravity's Rainbow 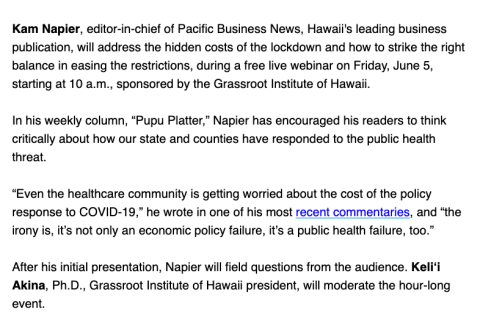 The Grassroot [sic] Institute is a front name for Keliʻi Akina Ph.D [in what? when? and from who?]. It is intended to give the impression that there is “more there” than actually is.  It is a “Potemkin Village” feature.

“In politics and economics, a Potemkin village is any construction (literal or figurative) whose sole purpose is to provide an external façade to a country which is faring poorly, making people believe that the country is faring better. The term comes from stories of a fake portable village built solely to impress Empress Catherine II by her former lover Grigory Potemkin, during her journey to Crimea in 1787. While modern historians claim accounts of this portable village are exaggerated, the original story was that Potemkin erected phony portable settlements along the banks of the Dnieper River in order to impress the Russian Empress; the structures would be disassembled after she passed, and re-assembled farther along her route to be viewed again as if another example. The term is a translation of the Russian: потёмкинские деревни (IPA: /pɐˈtʲɵmkʲɪnskʲɪɪ dʲɪˈrʲɛvnʲɪ/; romanization: potyómkinskiye derévni).[1]”

Kam Napier is presented as if he knows something about how to deal with epidemics. There is no evidence he does. He is a propagandist for limited liability corporations. Limited liability corporations primary feature is that it exists to take advantage of a government subsidy. That subsidy is not a “direct payment of value” but rather a government grant of legal immunity.

The Grassroot [sic] Institute claims to oppose “government intervention” as “bad” yet has never analyzed or discussed the largest subsidy–that of immunity.

This site uses Akismet to reduce spam. Learn how your comment data is processed.

You are currently reading Grassroot[s] Institute Dims at Wednesday in the Age of Reason-Munchausen (1988).